The question of how adult social care funding is put on a sustainable footing helped to define the 2017 General Election. Along with the NHS, it has become an issue totemic of wider choices around public spending and their impact on local services. Yet the long shadow of social care funding in the public and political domain hides a wider truth. Compared to other parts of the local state, social care funding has not been the epicentre of austerity. It has been relatively protected, with other services facing the most drastic spending reductions. They are services with fewer statutory responsibilities, like potholes, libraries and bins, but which people want and value no less.

Coupled with the recent reduction in the size of the state has been a creeping distrust in its efficacy. Although trust in central government has always been low, in recent years it has plunged to new depths. Breakdowns between election promises and governing realities have tainted political discourse. Not a month seems to pass without calls to ‘take the politics out of’ how one service or another is funded.

Both these trends are tugging at the fabric of civil society. For many, the services and assets that enrich life at the community level are being diminished. And yet there appears to be no situation in the near future where this is stopped or reversed. It is our opinion that this situation is unreflective of the nation and places that make it. The Brexit vote is often said to have shown a nation divided, but the campaign also demonstrated the importance of properly-funded public services to all.

It is our view the nation is a generous one, it just won’t always be directed to the nation or through the state. However global markets for labour, capital and culture may be, the desire to belong and contribute towards a place and wider community still holds strong. In the words of Edmund Burke, “To be attached to the subdivision, to love the little platoon we belong to in society, is the first principle (the germ as it were) of public affections. It is the first link in the series by which we proceed towards a love to our country and to mankind.”

Research for this report shows there is a gap between what people are willing to contribute towards funding local services and what they provide now. In this report we have defined this as goodwill. With extensive public polling, we have looked at the extent and shape of this gap, as well as how it can be monetised.

Our analysis shows people are willing to contribute more to their ‘little platoon’ when they know what it is spent on. As illustrated by the charts below, whether through extra payments in tax per month, or voluntarily via a one-off levy, there is a great deal of goodwill towards services like police and health; and issues like helping older people to live independently and supporting homeless people. This support is national, however goodwill looks different across the country. London and the East Midlands are the most willing to pay more, but certain services and issues seem especially important in some areas. Services for the lonely in Yorkshire and the Humber. Bin collection and recycling in the North West. 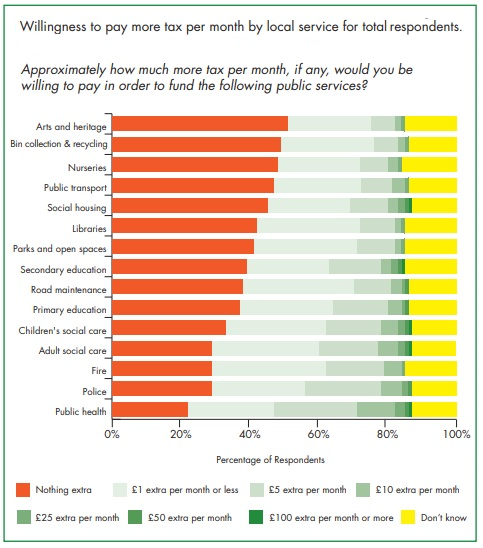 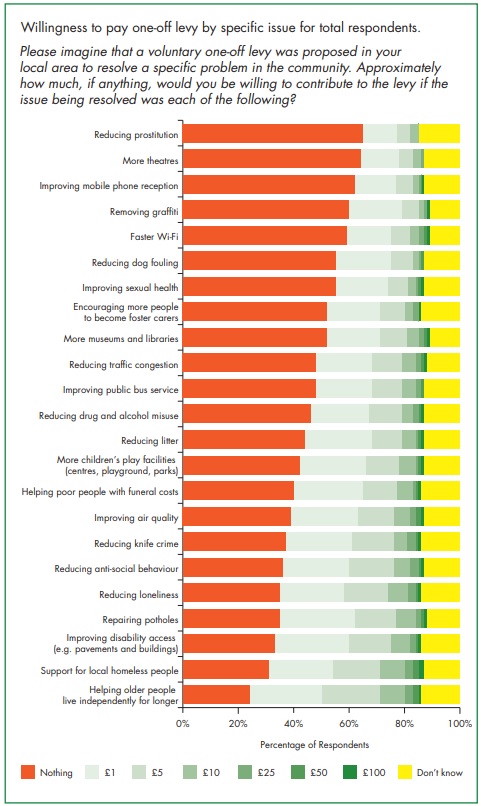 To engender local patriotism and enable a new programme of civic renewal, places should be empowered to monetise goodwill. This should involve three things.

Increasing contributions in the community and outside the formal bounds of the state: